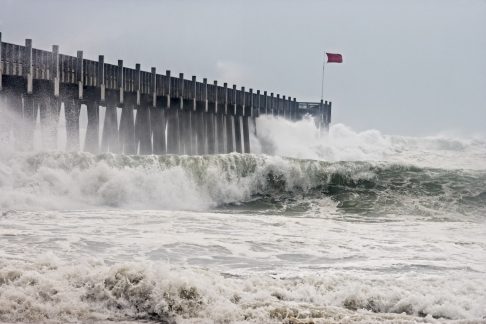 Florida is no stranger to hurricanes. According to data from the National Hurricane Center, 36 hurricanes have hit the United States from 1995 to 2017. Of those 36, 11 have directly hit Florida, making it the state with the most direct hits from a hurricane in the U.S.

Hurricanes are the most destructive natural disasters in Florida. They result in floods, wind damage and in some instances, tornados. Now, a new report from CoreLogic Inc. found Florida has the greatest risk of storm surge damage in the United States this hurricane season.

What is Storm Surge?

Storm surge is a threat to any coastline during a hurricane. This tsunami-like phenomenon is the abnormal rise in sea levels during a storm with the potential to cause billions in damage to anything in its path. Storm surge occurs when a multitude of factors related to water, atmospheric pressure and wind combine.

High winds and low pressure from the storm cause seawater to accumulate ahead of the hurricane. As the storm moves across the ocean, the powerful winds act as a plow; causing water to pile up ahead of a storm. The speed of a hurricane plays a significant role in the impact of storm surge. The surge levels created by fast-moving hurricanes are likely to be greater than slow-moving storms. That being said, though, a slower moving hurricane has the potential to move large volumes of water since it takes more time to move inland.

The impact from these waves can be incredibly destructive, with each cubic yard of seawater weighing nearly a ton. When Hurricane Michael made landfall in the Florida panhandle in 2018, homes were flattened or swept away by the 14-foot storm surge. Entire neighborhoods along Mexico Beach were reduced to bare slabs of foundation and countless trees were snapped in half.

A standard homeowners’ insurance policy does not cover losses from flooding caused by storm surge. This type of insurance must be purchased separately. However, depending on where your home is located, you may be required to purchase flood insurance as a stipulation of a mortgage. Because of Florida’s geography and proximity to water, it’s advised every Floridian has flood coverage.

The Possible Impact on South Florida

The 2019 storm surge analysis conducted by CoreLogic shows that more than 7.3 million homes along the Gulf and Atlantic coast may experience $1.8 trillion in cumulative storm surge damage this hurricane season. Florida has the greatest number of homes at risk for storm surge damage of any other coastal state.

Depending on the storm category, between 358,902 and 2,830,201 Florida homes are at risk for storm surge damage, with southern Florida predicted to suffer the most damage. If these predictions come true, they will have a tremendous impact on Florida’s economy. According to the report, damage from storm surge could cost anywhere from $73.2 billion to $581.6 billion to repair.

Florida holds six spots out of the top 15 metropolitan areas predicted to be affected by storm surge, with all areas ranking among the top 10. Single-family residents in Miami are the most at risk in the United States. CoreLogic expects nearly 800 thousand homes could sustain damage from storm surge.

Tampa, Fort Myers, Bradenton, Naples and Jacksonville are also expected to feel the impact of storm surge this hurricane season.

Floridians should make sure they have the proper flood damage coverage ahead of hurricane season. As mentioned earlier, homeowner’s insurance will not cover damage caused by flood waters. Contact Germain Law Group, P.A. if the time comes when you need to file a claim for flood damage. Michael Germain will negotiate with your insurance company to ensure you receive the money you need to repair your home.